Television – the name alone has so much meaning to it. The ability to see across the world –The ability to see things that were never visible before; be it education, business opportunities or simply a world of fun and enjoyment, the world has and never will be the same.

There have been several milestones in the world of broadcasting and advertising on television.

– 1939, the first televised major league baseball game between the Cincinnati Reds and the Brooklyn Dodgers aired on W2XBS a station of NBC.

– July 1, 1941 at 2:29 p.m. the first TV commercial ever aired on WNBT at Ebbets Field at the Brooklyn Dodgers vs. Philadelphia Phillies baseball game. The TV ad was 10 seconds long advertising Bulova watches. “America runs on Bulova time” was the entire ad. The commercial cost Bulova between $4-9.

– Prior to the presidential elections in 1952 WWII hero, Dwight D. Eisenhower made use of TV to campaign and get his message across the nation. From very far away people felt that he was addressing them and their questions directly.

– 1964 Ford Motors featured the first TV commercial of the now iconic Mustang. Ford expected to sell 100k at most. Within one month they sold over a million.

– February 26, 2007 the first official ad for the first iPhone was aired publicly on television during the Academy Awards.

– Television has evolved tremendously as have the commercials on the various shows. It has brought lots of information, entertainment and has made the world smaller for all of mankind.

– This week, the future of kid’s education has reached a new milestone, as the Kars4Kids infamous jingle is being aired across TV stations around the country.

– Each child precious, their education paramount; and so Kars4Kids brings that concept visually to America through the vast medium called television.

What do you know about global warming and climate change? According to one survey, not much. A new Kars4Kids resource may make a difference.

What does party affiliation have to do with the rise in used car prices? Kars4Kids lays it all out for you with stats and charts. 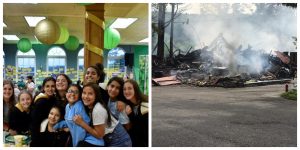 An enormous fire broke out on August 12 at TheZone, the Kars4Kids-funded summer camp for girls in the Catskills. The damage was extensive. But one