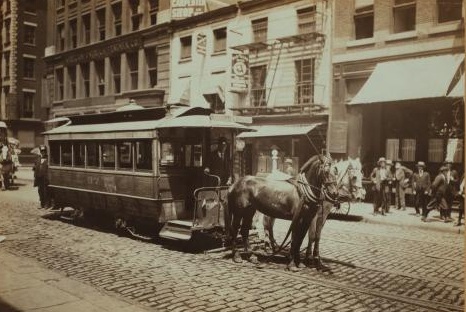 Cars are a major source of pollution. That’s why there is a great interest in recycling old cars, such as by donating them to a nonprofit like Kars4Kids, and in creating environmentally-friendly zero-emission vehicles (ZEV’s). Some of us wonder how much pollution we might have prevented by sticking with horses.

The truth is that horses were expensive, loud, accident prone, caused much traffic congestion, and yes, lots of pollution. The four-legged creatures may not have needed gasoline to go, garages to house them, or mechanics to fix them. They did, however, require horse feed, stabling, and the care of a veterinarian.

But that’s not all. A single horse could produce 20-50 pounds of dung each day. Now multiply that number by thousands of horses on the streets of New York City alone and you begin to get the picture of the pre-car era. At any given point in time, there would be a thick layer of manure on the ground. It stuck to your shoes when fresh, and when dry, traveled through the air on windy days. And yes, it seeped into the water supply.

An abandoned car may be an ugly sight. But imagine New York City in 1880, a year when 15,000 horses died on city streets. Or think of Wyandotte, Michigan where a horse carcass was left to rot on Oak Street for many days until someone thought to cart it away.

The odd thing is that the horse-drawn conveyances of the 19th century had an accident rate (per capita) comparable to that of the automobiles of the 20th century.

There were other problems, for instance an 1872 epidemic of equine flu known as the Great Epizootic. Horses throughout Toronto and the northeastern U.S. sickened and were put out of commission. The epidemic underscored the importance of the horse in the North American economy. One newspaper editorial noted that, “business requiring the assistance of the equine tribe has received a severe shock.”

Funerals had to be postponed and fires were left to rage and destroy homes and businesses. It was time to seriously consider an alternative means of conveyance. Especially since in addition to 30 pounds or more per horse, per day of manure, horses produced a daily gallon of urine as well. Some of the cities had good working plans for trucking the manure out to rural farms, while others simply offloaded the stuff into local rivers.

Horse manure, trod over and turned into airborne dust, attracted rats and flies. One government estimate from those times held that 95% of all disease-causing flies depended on horse manure to breed. Often, city streets were clogged by dead horses, creating a dreadful-appearing not to mention smelly impasse.

The upshot of all this is to clarify the pollution issue. It is important to find cleaner cars with better fuel economy. But even the worst, gas guzzling car is probably loads better than a highway of horses.