Car radios keep us entertained and informed during the daily commute to work and back, and during long road trips, too. It’s true that CD players have made inroads (if you’ll excuse the pun), supplanting car radio use to some degree. But the good old AM/FM car radio is still going strong, based on a 2019 survey. It seems that 67 percent of drivers are still all ears for that old dependable, the car radio, when they want to listen to something while driving.

Once upon a time, however, we almost lost that right. In 1930, for example, both the state of Massachusetts and the city of St. Louis proposed laws banning the use of car radios. It was believed that car radios caused driver distraction, leading to accidents. Tuning a car radio to find a station, it was thought, might divert the driver’s attention away from the road, while the music itself, might lull the driver to sleep. Today we have a concise phrase for the focus of their concern: distracted driving.

The issue of car radios as a distraction didn’t end in 1930. Four years later, the Auto Club of New York polled members and found that 56 percent deemed the car radio a “dangerous distraction.” The Radio Manufacturers Association disagreed. The RMA believed that radios helped drivers avoid danger by cluing them into impending storms and by helping drivers remain alert, preventing them from falling asleep at the wheel.

Car radios, it should be noted, were not always a foregone conclusion. When the first car radio debuted in a 1922 Chevrolet, it cost $200. That would be equivalent to $2,800 in today’s economy. The car radio came with an antenna that covered the entire roof of the car, batteries so big they almost didn’t fit under the front seat, and two mammoth speakers placed behind the front seat. The experience of listening to this early car radio has been likened to forcing an entire live orchestra into your car.

Car manufacturers learned to make car radios smaller and more user-friendly and efficient. The Galvin brothers brought their version of the car radio, installed in a Studebaker, to the 1930 RMA convention in Atlantic City. This new-fangled version of the car radio was called the “Motorola,” a combination of “motor vehicle” and Victrola.” Soon, more compact versions of the car radio began to appear on the market, produced by Motorola, Philco, and others. By 1940, the push-button car radio had become standard.

FM Arrives on the Scene

In 1952, riders and drivers, courtesy of Blaupunkt, were first able to hear FM car radio. The year 1963 saw the first all-transistor radio, by Becker Monte Carlo—before that, car radios came equipped with vacuum tubes. Ford and Motorola launched the 8-track player in 1965, while 1968 brought us the cassette player.

The last year of the cassette player was 2010, with Lexus and Ford the final hold-outs. 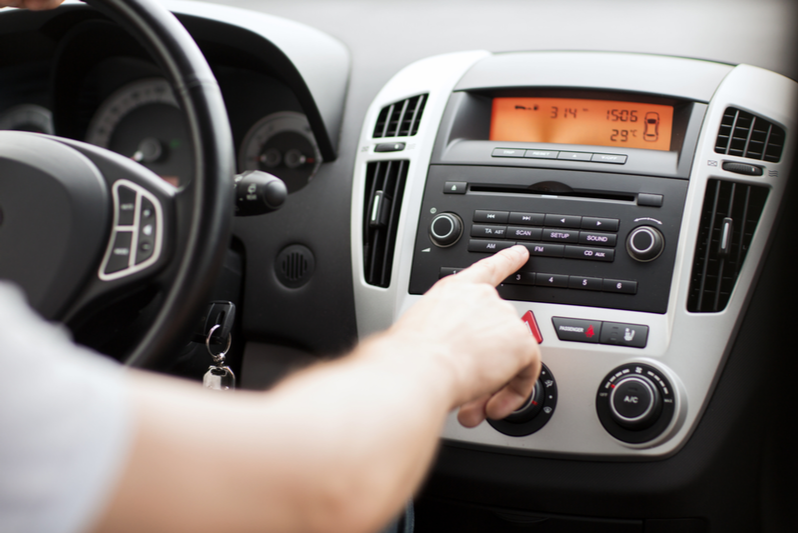 Stereo sound came to your car in 1969, courtesy of Becker, and in 1984, TADA! Sony came out with the first car CD player.

And still, the car radio continues to hold sway, making us sway (hopefully not too much) as we drive, making the ride that much more pleasurable, or when traffic is bad, at least that much more tolerable.