The History of Cars Part Six: The Internal Combustion Engine 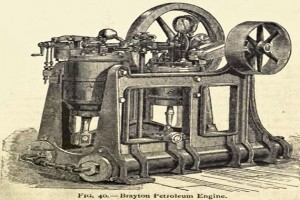 The History of Cars Part Six: The Internal Combustion Engine

So, where were we? Oh, yes! We just learned about steam powered cars. So now we get to find out about the secret behind modern cars – the internal combustion engine!

A steam engine is an external combustion engine. In the steam engine, as we have seen, there is a special furnace or burner which heats up a tank of water. The heated water then produces steam which powers the engine. So, the combustion occurs outside the engine. This of course involves several large, separate parts, making a small, light engine that runs on steam-power very difficult to produce.

An internal combustion engine is an engine where the heat source, or combustion, is inside the actual engine. It basically consists of some sort of fuel, most commonly gasoline, which is ignited directly in the cylinder. The force of the explosion (the combustion) drives piston, which powers the engine.

In 1859, Jean-Joseph-Etienne Lenoir, a Frenchman, developed an internal combustion engine. (There had been other attempts, but no one managed to produce a practical model.) His engine was called a two-stroke engine, because of the amount of times the piston moved for every complete cycle of the motor. It was powered by coal gas.

Although his engine was successful, it was not strong enough to power a carriage. Instead, it was used to power small machinery.

It was in 1876 that an internal combustion engine was developed by a German named Nikolaus Otto that was strong enough to power a carriage. This engine employed a four-stroke cycle, known as the Otto cycle, greatly increasing its efficiency.

Let’s take a closer look at the Otto cycle. 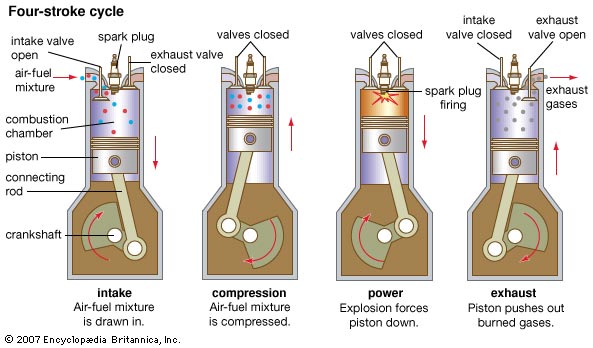 Otto’s engine was a rotary engine. In other words, the piston, moving up and down in the cylinder, turned a bar called crankshaft. This crankshaft could be attached to a wheel, or whatever it is that is supposed to be turned.

As we mentioned, the Otto cycle goes through four strokes per cycle. Every time the piston moves, whether up or down, is called a stroke.

The first stroke (1) is called the intake. In this stroke, the piston moves down and the intake valve is opened. Since the piston is sealed tightly against the cylinder, a vacuum is created and the fuel is sucked into the cylinder.

The next stroke (2) is the compression stroke. Now, both valves are sealed and the piston moves up. This compresses the fuel, making it more combustible.

Finally, comes the exhaust stroke (4). It gets its name from the fact that the engine is quite tired at this point. Just kidding! It’s called the exhaust stroke because the used, or exhausted, gases are expelled. In this stroke the piston goes back up, and the exhaust valve is opened. This pushes the used gases out of the cylinder.

As long as fuel is supplied to the engine, the cycle will continue, and the crankshaft will turn.

This engine model was able to operate at a much higher efficiency than previous types of engines, due in large part because of the compression stroke. Otto himself, however, didn’t think the best use for his engine was for vehicles. He instead wanted it to be used for other types of machinery.

It was his manager, Gottlieb Daimler, who saw the potential of the engine to be used to power vehicles.

But, that will have to wait – until next time!

As America inches ever closer to replacing the gasoline-powered vehicle with electric vehicles (EVs), it’s good to pause and consider how the gas-run vehicle helped pull our country out of the Great Depression.

Da Vinci: His Self-Propelled Cart was the Earliest Vehicle

Da Vinci was way before his time, inventing the precursor of today’s modern vehicle in 1478. A model of his self-propelled cart is in France.