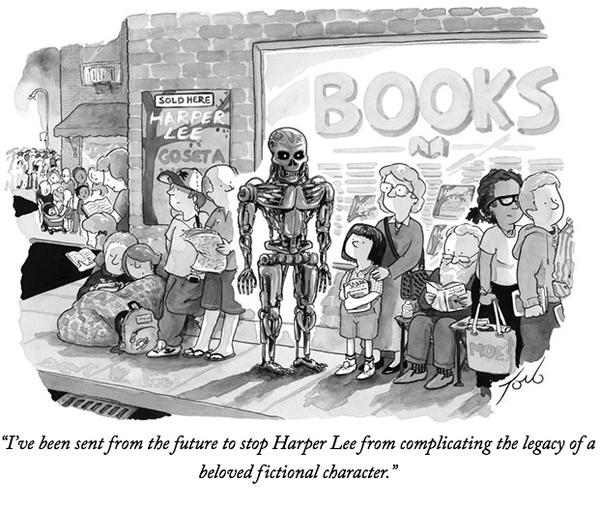 The novel To Kill a Mockingbird, by Harper Lee was first published in 1960. It went on to win the Pulitzer Prize, and is considered to be a classic of American literature.

The protagonist, or at least one of the principal characters in the book, is Atticus Finch. A small-town lawyer, he takes on the defense of a black man accused of a heinous crime. In the face of popular opposition to his cause, he nonetheless follows what he believes is the correct moral path.

Since 1960, Harper Lee has not published a single book. So the hype surrounding the publication of her “lost novel,” Go Set a Watchman, is to be expected.

What is very unexpected, though, is the character of Atticus Finch. While in Mockingbird he was a principled man, who defended a black man in opposition to popular sentiment, in Watchman he somehow turned into a racist who is strongly opposed to desegregation.

With the publication of Harper Lee’s new book, people are having an interesting reaction. Readers are both excited about reading another novel featuring the beloved characters of To Kill a Mockingbird. But, at the same time, there’s a feeling of disappointment. Not in the book itself, which by all accounts is a worthy companion to Mockingbird, but in the revelation of Atticus’s true nature.

Why are people upset? The novel is great!

We need heroes, badly. Heroes are people who accomplish what we dream about doing, and do it superbly. They’re role models, too, who teach us how to act by example. We consciously and subconsciously ask ourselves, what would my hero do here?

Without heroes, we can be uninspired, or unable to believe that we can truly make a difference. Heroes make things possible!

Perhaps that’s why people are having such strong reactions to revelations that Atticus Finch does not have the pure, good character that he was portrayed as having in To Kill a Mockingbird. They lost sight of their North Star. They lost a hero.

Children, in particular, are naturally drawn to heroes. They will obsessively follow athletes, musicians, and fictional characters of all kinds. But, almost like newly-hatched chicks, they tend to fixate on whomever they see first. They can’t always differentiate between genuine, “heroic” heroes, and charismatic characters who are the last choice we want to be our kids’ role models.

So, how do we ensure that our kids have the right heroes? While we can’t really make that choice for children, we can guide them. We can see to it that they have good heroes to choose from.

That’s why we have to provide our kids with the right books, the right heroes. We have to understand the power of stories, and stories about heroes, in particular. They’re not just entertainment.